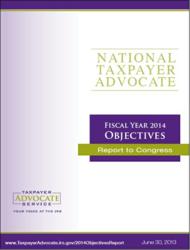 National Taxpayer Advocate Nina E. Olson released her FY 2014 Objectives Report to Congress that identifies the priority concerns the Taxpayer Advocate Service (TAS) will address in the course of the upcoming fiscal year. The report, released June 26, 2013, expresses particular concern about the impact of spending budget cuts on the IRSs capability to meet taxpayer requirements, the IRSs unwillingness to problem full refunds to victims of tax return preparer fraud, and shortcomings in IRS procedures for assisting victims of tax identity theft.

In addition, Olson released a Particular Report to Congress examining the IRSs use of questionable criteria to screen applicants for tax-exempt status. The report suggests a framework that incorporates appropriate checks and balances. The National Taxpayer Advocate also delivers her evaluation of some of the root causes of the difficulties, tends to make preliminary recommendations to address them and discusses TASs efforts on behalf of taxpayers who sought TAS assistance.

Right now, the IRS is an institution in crisis, Olson wrote. In my view, even so, the actual crisis is not the 1 generating headlines. The genuine crisis facing the IRS and therefore taxpayers is a radically transformed mission coupled with inadequate funding to achieve that mission. As a consequence of this crisis, the IRS gives restricted consideration to taxpayer rights or fundamental tax administration principles as it struggles to get its job accomplished.

The Objectives Report identifies the priority concerns on which the Workplace of the Taxpayer Advocate will focus for the duration of the upcoming fiscal year, and describes quite a few challenges facing the IRS, like: &#13

-Conducting education and outreach to taxpayers about their responsibilities below the Inexpensive Care Act.&#13

-Resolving erroneous revocations of the tax-exempt status of small